Wednesday was quite a day. Monday was a full day of competition, however Tuesday consisted of just the one stage. Wednesday was always going to be a little more ‘hardcore’ than the leisurely approach to Tuesday.
As we progress through the week, we approach what I’ll call the ‘crowd favourite’ stages, where the race distances are bigger and the attention required is exponentially increased. With a guy sitting to my right who believes about 80% of what I tell him, I need to be on my game from a Navigator’s perspective. He is a brilliant driver, at home in the clunky, 34 year old Commodore, generally in charge of pointing it in the right direction.I trust him, implicitly.
As mentioned previously, High Plains had been cancelled, leaving us with Moriarty, Paloona and Sheffield before the car ate a large portion of failure. The battery had shit itself, and we were in the line getting ready to start Sheffield. Panic ensued, as we called our awesome service crew, who had sourced and arrived with a new battery inside 20 minutes. The new battery was fitted, and we were on our way!
What we had not banked on, was that the alternator was the reason for the failure. Around two thirds of the way through the following stage, Cethana, the alternator failed. Car, stopped. On the side of the road. Dead.
As is required in competition rallying, I had to jump out and erect warning triangles at 25m and 50m before the car, before waving the big, green ‘OK’ sign at the competitors following us. Anthony yelled “fuck” a lot, and I wondered what the appropriate behaviour was for consoling a pissed off driver.
Much to our surprise, we had actually broken down in a place that had mobile phone reception. We were able to contact our awesome service crew, who set about arranging another alternator.
We sat around on the side of the road for quite a while, watching the top level competitors scream past us, until one pulled up in from of us with a flat tyre.
The Subraru pulled up behind us, with the navigator screaming “JACK! JACK!” at us. I looked blankly at Anthony before realising that he had a rear driver’s side flat that needed replacing.
“Comedy of errors” is what I am going to call this experience. They had a jack, but no handle. We had a rattle gun, but no socket that suited their jack. After giving them a shifter to operate their jack with, we were able to rattle gun their wheel off and assist with the replacement, before sending them on their way to generally kick ass.
After MANY hours of waiting by the roadside, I bet Anthony that the car noise I could hear approaching was our crew – I won the first drink of the night. With tools all over the ground, lots of swearing, broken bolts, more swearing, nearly freezing to death and being attacked by some kind of sugar and flesh eating bug – we were once again ready to roll with car 689 on point.
You may be asking at this time “where is the general update on Tim and Jason?”. With a deep sigh, I can inform you that they spent most of the day in various Subaru dealerships trying to diagnose a cooling system fault, before admitting defeat in being told that he had a headgasket issue. More to follow, as they are evaluating options.
We ended up at the Beachfront Voyager in Burnie for the night, where I enjoyed KFC’s new Tabasco Zinger and accompaniments before working on work spreadsheets for hours before hitting the hay for an early start. 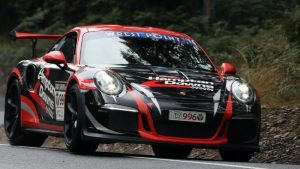 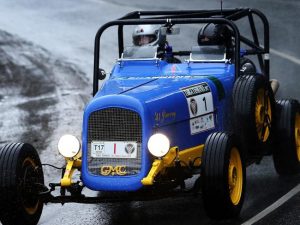 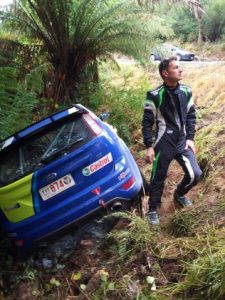