Don’t despair, they are back in the race as at 5pm today. 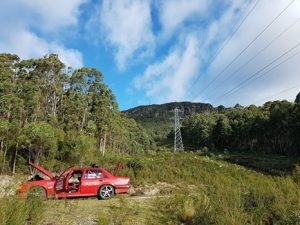 Poor little car 689, dead battery. Our infamous Rallying duo has managed to kill the car’s battery. My suggestion that they “Holler for a Marshall” was promptly ignored and Service Crew had them back in the race next to no time. Given how many camera’s, video equipment, digital comms, phone connections for stage entertainment and everything else I am surprised that the poor battery lasted this long.

At the end of yesterday (Tuesday 25th), car 689 was 6th in its class which is a fabulous result. With the dead battery and subsequently the dead alternator, this will not be so good on the results.

You know you made it when you made it when featured in the “Other Side Production” video however I would make a suggestions that the Red glasses as sported by Anthony are not what you could call a fashion statement, not unless you are in contention for playing Beelzebub.  Nevertheless I am impressed by the way he is saving his tyres as featured in the photo. Way to go!