The one month anniversary of obtaining my new car saw me hightail it to Wakefield. I had been looking forward to this day for a while. Also, my car needed to stretch its legs (so to speak), having being stuck in traffic and never exceeding 60 km per hour.

The traffic cleared just past Campbelltown, and I was able to put my foot down and see what my new toy was capable of. It settled into a very nice driving mode. The other drivers behaved and stayed where they belonged, instead of driving in the right-hand lane under the speed limit. I expected the fuel consumption to be hugely different from the E250, but was pleasantly surprised when I reached Sutton Forrest for my overnight pit stop to see that the fuel gauge was sitting just under ¾ full.

The following morning had me set off early, as I had been warned by SMS from Boz that session would start earlier due to trials for the Sunday race. The only worrying sign was a message on the dashboard telling me to check the oil. I will admit to opening the front bonnet in the first couple of days, but could I locate the dipstick? And not knowing where the oil went left me very sheepish. The ribbing from Boz and Sam (the Wakefield marshal) would have been painful. My, how things have changed. I could easily change the oil and clean the spark plugs on my MGB, but the solid engine cover on the Merc left me feeling very inadequate. Being a fully paid-up member of Cowards Anonymous, I called Ben from Macintosh, who assured me that the oil would not be at dangerous levels, and my trip home would be safe. However, I was still at the dealership bright and early on Tuesday, where one of the mechanics showed me (a) where the oil goes, this being very important, and (b) the correct way of measuring the oil levels. I hope never to put this information to use, but the fact that I know will eliminate any further embarrassing moments.

The day at Wakefield was huge fun. I was allocated Len, Boz’s new instructor. Unlike Boz, Len is a man of very few words, despite the fact that a few times I managed to change from 4th to 3rd gear, when I should have been in 5th. My excuse, and I am sticking to it, is that the helmet obstructed my hearing, and looking at the rev count as I should have was just not happening automatically. Poor Mezzie. If it had been Boz with me, the repercussions in the “Speech” I would have been given would have lasted for the rest of the day. 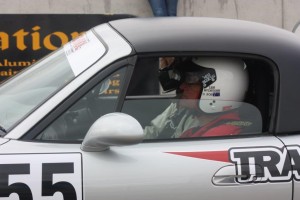 I finally met John Connolly. He, of The Weekend Australian- Prestige Motoring fame. We had been emailing for a couple of years, and I think I am in the minority of his readers who does not abuse him. That is his picture gracing this story. He is a much faster driver than I am, but at least I managed to stay on the track. Says she, with her halo seriously tarnished. 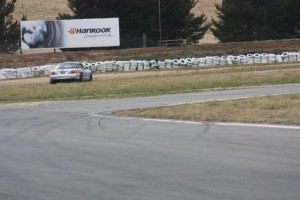