The following are Mr Hamilton’s own words, some names have been changed to protect the guilty.

Tim and Anthony successfully made it across Bass Straight on the Spirit of Tasmania with the cars, only to be greeted by some terrible weather. The Commodore protested by throwing a windscreen wiper off the side of the screen, but it turned out to be nothing more than a loose nut (and I don’t mean the person behind the wheel).
I arrived into Launceston airport on time, after being reminded why Jetstar is always the wrong answer to any travel related questions. #7kg #enforced #nosoupforyou.
The lads were waiting for the luxurious Kia Carnival to be prepared, after being advised by the Hertz representative that cars booked for 9:40am should not be asked for until precisely 9:40am.
One of the things that I’ve always loved about the Targa is their generous approach to driving race cars on the road in the lead up to the event. Walking out into the airport carpark, I was greeted by the bright red Commodore in all of her unwashed glory.
Having forgotten how hard it is to get in and out of (this is no Dukes of Hazzard setup), I managed to dislocate my personality and pancreas to climb into the office for the week and review the recent upgrades: digital comms, phone connection for transport stage entertainment, some new gauges, new handbrake and the invisible (and rather costly) diff housing and rear axle setup.
We set off in the roughest, toughest old commodore on the road and went to The Olde Tudor motel, and commenced work on the car in the carpark, as the 12:00pm scrutineering appointment was rapidly approaching. Tim followed in the Kia, somewhat impressed by it’s apparent power and general handling prowess. A quick trip to Supercheap was needed, as our fire extinguishers weren’t in date. Once fitted, we were off to get our documents and have the car checked.
We emptied all of the ‘crap’ out of the boot of the red rocket, transplanting it into the cavernous spaces within the Kia Carnival and set off for documentation and scrutineering, where the car, drivers and safety equipment are checked for compliance against the world’s largest rulebook and we’re cleared to race. For the first time since inception, the car was immediately cleared to race.
The car tipped the scales as 1430kg (clearly, without #wogsinacommodore) before being parked up for the rest of the weekend and we went to work on installing the stickers. Tim, thankfully, had brought some bits and pieces from a professional signwriter, which made our installation a little more predictable.
Amongst all of this, Tim managed to prep his Subaru WRX for the Tour category by completing a long list of tasks including : a) washing the car and b) turning up. It’s a shame that his co-driver Jason didn’t understand that that second point was part of his requirements, as he missed his flight out of Brisbane by one minute, and still isn’t here.

And as if the boys didn’t have enough petrol sniffing yesterday, they have gone to the Car Museum in Launceston. 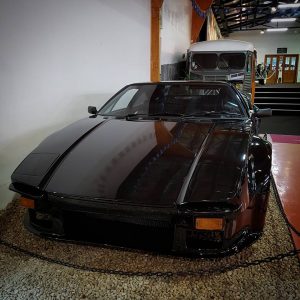