The red plastic, yellow-roofed car driven by toddlers since the late 1970s sitting on the side of the road waiting for the council clean up could have turned into something like this.

A mechanic in Oxfordshire, England, spent over thousand hours converting a Daewoo Matiz into an adult version of the classic toy. The car runs on unleaded fuel, and can go from 0 to 60 in about 17 seconds. The conversion, true to the original, retains the two huge drink holders and the ignition is a big button. Apparently the idea came up during the “Most Driven Type of Car” type of conversations people have after one or two drinks and anything is possible. Whereas most of us forget the exchanges by the morning, this guy ensured that his idea came to fruition, with his brother and a friend. The inventor would like to use his creation to raise money for London’s Great Ormond Street Children’s hospital. What a unique and delightful idea. I hope he raises lots of money. Perhaps Top Gear’s Stig could drive it as a promo. What a combination: Stig, Big Bright Red and Yellow Toy Car. This could cause a few surprises along the road.

Yet another alternative as supplied by friend. So for the sake of anonymity, lets call her Julie. 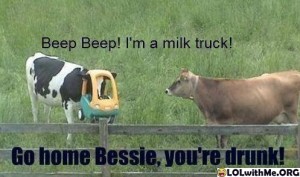