Unfortunately we were not meant to be going to Albury but Adelong (population 884) 177 miles before. Some of the more astute drivers in our group of six cars (more of this later) had suggested to our lead car that perhaps the Hume Highway was not exactly a rally track. But the lads whose identities will remain nameless, because you know who you are Todd, Jay and Ben, were reading and laughing at the book Great Australian Slang, they had bought at The Dog On The Tucker Box café, five miles from Gundagi.

The Dog on the Tuckerbox (Tupperware food container for our Greek and other foreign readers) is a beautiful life sized statue of a dog sitting on a tupperware food container that brings to almost life the canine hero of a 1880s poem. In fact so iconic is this metal and plastic art form, created in the manner of Michelangelo Buonarroti’s Pieta, that Prime Minister of Australia, Joe Lyons, unveiled the statue in 1932 to mark his election campaign.

Readers, this is a place you have to put on your bucket list. To give it it’s full name, The Dog on the Tucker Box Pioneer Monument, welcomes visitors with a newly redesigned garden precinct featuring Australian and Tasmanian animal figurines, the native Australian giraffe is a particular highlight. The aforementioned cafe serving hot, cold and luke warm refreshments, souvenirs, Australiana, antiques, old wares like your correspondent and his co-driver, now Michael McMichael, and a peaceful picnic area away with the graves of many deceased previous dogs on the tucker box. The place goes off in November for the Dog’s Birthday.

There are six cars now because as you remember Michael (so good they…..) and Libby McMichael’s mighty German BMW had gone to Valhalla or Cobar which ever was closer and one of our former group members couldn’t stand the heat of the publicity in this daily letter (ie she was too embarrassed by our ineptitude) and joined another team. In the charity rally business caper leaving one group for another is akin to a child leaving his or her family for another, better family. Of course I know this is a not an uncommon experience for many of us.

But friends, this mistake was the start of a descent into the ninth circle of hell. To come on our journey to the quaint village of Dargo was snow, blinding fog, fallen trees, cyclonic winds, dust and narrow winding rock infested mountain roads where one error at the wheel could turn the car into a deadly missile as it hurtled off the track down a huge ravine where the occupants would be crushed with the car into a surreal metal Ford Ute sculpture or, all of these fierce elements together.

Luckily we had taken sustenance in the form of a meat pie (German spy, dog’s eye) and sausage roll (basically a snaga in pastry) from the wonderful hamlet of Omeo (population 487). Naturally on your behalf we tested the drinks list at both pubs. Can I personally recommend the Golden Age Hotel replete with two luxury spa units, 13 motel style units and six pub style rooms. The neo art deco hotel provides for all tastes. From there we climbed more than 1,000 metres to the skiing capital of the Hotham shire and environs – Mount Hotham. And didn’t our group have fun in the high winds, snow and freezing cold until an older citizen complained about the ice balls being thrown at his windscreen.

There is something to be said for driving on a mountain top along an icy road when you can’t see because of the fog. As it turned out not many of our group died. Finally after 23 hours or nearly a day of driving we reached Dargo (population 144) where Tom and Teen Howson have just taken over the wonderfully rustic former timber mill the 1898 Dargo River Inn which offers Bundaberg rum on tap. Today we head for the great city of Melbourne on the near final leg of this enormous event. 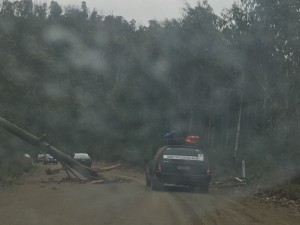 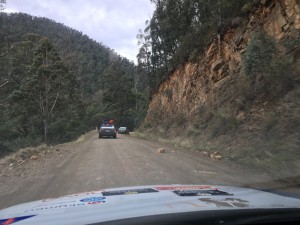