Well we didn’t, but our intrepid team of six cars and three support trucks who were dopey enough to think we knew where we going actually managed:

Once the Victorian tactical response unit realised we were dim-witted rather than dangerous, they released us on a good behaviour bond. From there it was a relatively easy cruise to the Melbourne seaside town of St Kilda (population 17,795. You can get some idea of the features of this Beaulieu-sur-Mer with Luna Park from songs such as “Killed her in St Kilda” by Voodoo Lovecats, “St Kilda Nights” by Purple Dentists and “Melodies Of St Kilda” by Masters Apprentices.

Anyway the local residents were very pleased to see 400 or so of Australia’s, two of Tasmania’s, one of France’s and one of Canada’s finest dressed to varying degrees as pirates. Not many were arrested. Then it was on to that mightiest defender of our country’s seas – the Spirit of Tasmania. For those Greek, Tasmanian and other foreign readers the Spirit is the only transport between the two countries at the bottom of the world. Unlike her sister ship the Titanic, the Spirit was built in 1998 in Finland. After a series of near sinkings, engine failures, listeria and leprosy outbreaks it was decided to find some chump to buy what was then named the Marie Celeste.

Readers, you know the outcome. The same Australian government that has just given the sinkers of Greenpeace’s Rainbow Warrior the contract to build three submarines for $60 trillion bought the daughter of the Titanic and renamed the former mothballed rusting hulk the Spirit of Tasmania. Now many of our pirated hadn’t been on any sort of ship, let alone water before and by the time the waves in Bass Strait were approaching 20 metres there wasn’t too much Johnny Depp – much more Les Paterson talking to Bill and Bert on the big white telephone. For those Greek, Tasmanian and other foreign readers, talking to Bill and Bert is local slang for projectile vomiting due to acute seas sickness bordering on death.

Sorry readers not a long report today because I lost 60kgs on the way over and am feeling a bit too weak to keep tapping these keys.

But we will have a bumper report tomorrow if I survive the last day and rum & scallop tasting in Hobart. 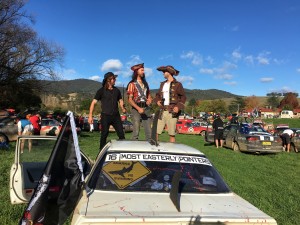