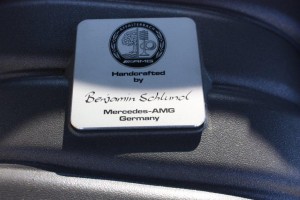 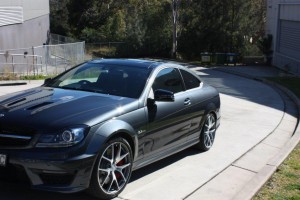 Sometimes best laid plans don’t quite work. Saturday found me at Macintosh about 30 seconds after the front door opened, ready to pick up my new toy. I feel that Macintosh should have my signature on record, I have signed so many documents there over the years. However, a few more needed to be signed on Saturday before I was allowed to leave with the C63 in my hot little paws. Documents signed, keys in my possession, about 100 pages of contracts, registration papers, insurance and everything right in the world, I made it home and introduced my car to where he will live for the next four years. The only glitch was that I all of a sudden realised how noisy the V8 truly is. Let’s just say that I hope my neighbours will enjoy the alarm clock as I am leaving for work, because they are going to wake up whether they want to or not.

My not-so-cunning plan to play a joke on a friend was simple enough. Ring him in the morning and ask for his assistance with a non-existent problem with my E250. I would pretend that something had gone wrong and that the car sounded like a V8. Because everything happened so quickly with the C63, he did not know that I had a new car. Both cars are roughly the same size, both have two doors, the E250 was black, the new one is dark grey. Since I planned to arrive after dark, merely ensuring that I did not park in his well-lit driveway should have worked perfectly. I called the friend in the morning, and much to my delight, he and his family were out, and would not be returning home until much later. An agreement was reached to be at his place after 7 pm. Being winter, this would work in my favour. He lives in a cul-de-sac, so street lights are far and few between. So, all set. But I had forgotten how deathly quiet suburban streets can be after dark. Let’s just say that I may as well have taken out the front page of the Sydney Morning Herald. He heard the car from about two blocks back. Instead of me getting the upper hand, what actually happened was him coming out of his house with a sarcastic “So, I hear that you have a new car!”

He is one of the very few people I do lend my cars to. I handed over the keys so that he and his youngest son could go for a drive. I am starting to question this, as his son returned grinning from ear to ear, with a smart-alec remark that the car corners well at 150 km. Aaaargh!!